Tom Petty & The Heartbreakers with Tommy Tutone of 867-5309 fame opening. Eleventh row seats smack in the center. Damn The Torpedo’s was released eight months prior and was on fairly consistent rotation on both WMMR and WNEW. For those of you that remember rock and roll radio.

Tom and the band come out firing on all cylinders with ‘Shadow Of A Doubt’ and it never lets up from there. Covers of Solomon Burke’s ‘Cry To Me’, the Isely’s ‘Shout’ and Eddie Cochrane’s ‘Something Else’ brings down the house.

As my small concert crew are leaving our seats and headed back to Jersey, there’s someone else down. This guy who was in the twelfth row. Clearly inebriated. So much so that he couldn’t get up. Challenging yours truly to a fight. For what? He was much older than I, but I was much more mobile than he. So I stepped around him. But he kept challenging me to fight. Clearly he made an impression as I’ve still not forgotten him to this day. 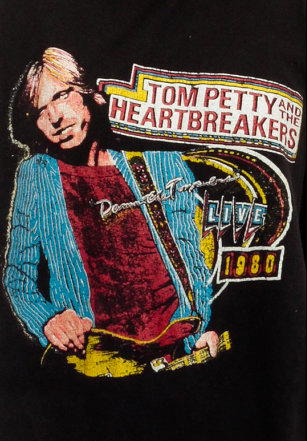 Tom Petty and the Heartbreakers Shirt from the show

Tom Petty & The Heartbreakers with Trey Anastasio of Phish fame opening. Seventh row on the floor stage left. The Highway Companion tour had started a month prior and was gaining steam as it rolled into NYC.

This was one of the few times I’d procured tickets through an outside agency. I hand my tickets to the gentleman ticket taker and his bar code wand lights up in red. He tells me to wait just a moment. He brings back someone looking like a superior. He looks at the tickets and then says to follow him. At this point I’m feeling pretty good as I’m figuring the seats are so good that he’s going to give us some sort of special escort to them or something. Or something like that. Well, it was something, but not something like that. Rather than lead us into the arena, he leads us into a small office where another gentleman is waiting. He looks at my tickets and then consults a list. He then opens up a drawer, a rubber stamp in his hand. He then proceeds to utilize said rubber stamp and stamps the word ‘VOID’ across my ticket. The word ‘void’ is usually not associated with smooth concert entry so I asked him what was going on. Seems that a bunch of tickets were sold back to the secondary market from folk who had originally purchased them through the Tom Petty fan club site. And I guess mine were two of them. So I get it, but this was through no fault of my own as they were legit tickets and how was I to know that they weren’t supposed to be sold on the secondary market? I asked the gentleman who voided my tickets what I was supposed to do? Where was I going to be sitting? He laughed and said I wouldn’t be sitting anywhere because I didn’t have any tickets any more.

So I left MSG. As I’m walking down the steps I look over to the person I’d brought to the gig and say, ‘Well, at least it wasn’t a date or something.’ She replied, ‘Um, I was considering this a date.’

I read a review of the show the next day; Stevie Nicks was on hand and they did a bunch of songs together. Stubhub refunded my money, but still.

“Music is probably the only real magic I have encountered in my life. There’s not some trick involved with it. It’s pure and it’s real. It moves, it heals…it communicates and does all these incredible things.” –Tom Petty